Statement regarding inputs by non-Party stakeholders to the global stocktake

Statement regarding inputs by non-Party stakeholders to the global stocktake 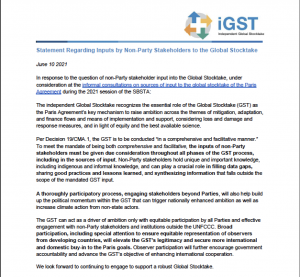 In response to the question of non-Party stakeholder input into the Global Stocktake, under consideration at the informal consultations on sources of input to the global stocktake of the Paris Agreement during the 2021 session of the SBSTA:

The independent Global Stocktake recognizes the essential role of the Global Stocktake (GST) as the Paris Agreement’s key mechanism to raise ambition across the themes of mitigation, adaptation, and finance flows and means of implementation and support, considering loss and damage and response measures, and in light of equity and the best available science.

Per Decision 19/CMA.1, the GST is to be conducted “in a comprehensive and facilitative manner.” To meet the mandate of being both comprehensive and facilitative, the inputs of non-Party stakeholders must be given due consideration throughout all phases of the GST process, including in the sources of input. Non-Party stakeholders hold unique and important knowledge, including indigenous and informal knowledge, and can play a crucial role in filling data gaps, sharing good practices and lessons learned, and synthesizing information that falls outside the scope of the mandated GST input.

A thoroughly participatory process, engaging stakeholders beyond Parties, will also help build up the political momentum within the GST that can trigger nationally enhanced ambition as well as increase climate action from non-state actors.

The GST can act as a driver of ambition only with equitable participation by all Parties and effective engagement with non-Party stakeholders and institutions outside the UNFCCC. Broad participation, including special attention to ensure equitable representation of observers from developing countries, will elevate the GST’s legitimacy and secure more international and domestic buy-in to the Paris goals. Observer participation will further encourage government accountability and advance the GST’s objective of enhancing international cooperation.

We look forward to continuing to engage to support a robust Global Stocktake.

About the independent Global Stocktake

A set of partners launched the independent Global Stocktake (iGST) at COP24 to support maximum effectiveness of the Global Stocktake. The iGST supports alignment of the independent community — from modelers and analysts, to campaigners and advocates — so we can push together for a robust GST that empowers countries to take greater action on climate change.

The ultimate goal of the iGST is to see that 2025 national submissions and commitments reflect learning from the Stocktake and are made more ambitious by the process leading up to them. The iGST hopes to provide information that helps break down the implications of a global assessment for particular countries, regions, and sectors, and to work with interested Parties to uncover how lessons learned can be acted upon.

Most of the initiative’s thinking to date about how best to support an effective GST can be found in the “Designing a Robust Stocktake” Discussion Series:

Additional analysis can be found on the websites of individual workstreams within the iGST consortium, such as these reports by the Finance Working Group:

The Paris Agreement outlines a five-year ambition cycle, anchored by the Global Stocktake and leading into enhanced national commitments every half-decade. We have only five of these 5-year cycles until we will be in the year 2050, when the world needs to be within striking distance of net-zero greenhouse gas emissions.

In recognition that there is no time to waste, the iGST is designed as a multi-faceted consortium with a nimble, fit for purpose structure. The consortium includes a set of complementary workstreams that act as platforms for dialogue and launching discrete pieces of work. These workstreams include regional civil society networks, work on the official GST process, and three thematic working groups loosely paralleling each of the main long-term goals of the Paris Agreement (on mitigation, adaptation, and finance), as well as another group focused on the cross-cutting theme of equity. Additional work occurs outside of the workstream structure, such as research currently underway on how the GST can be best leveraged to support national ambition.

The iGST welcomes the engagement of others providing advocacy and analysis to motivate countries to take on the commitments needed to combat global warming.