As part of Confluence’s series of climate-themed virtual convenings in and around COP26, I had the great pleasure to talk with Moutushi Sengupta of MacArthur Foundation, Uday Khemka of the SUN Group, and Pratap Raju of New Energy Nexus and Climate Collective Foundation on their strategies to address climate change in India and advance India’s climate ambition.[1]Moutushi Sengupta oversees the MacArthur Foundation’s India Office, which provides grantmaking to civil society organizations to support initiatives that directly contribute to achieving India’s climate goals. Uday Khemka is a philanthropist, businessman, investor, and advocate for climate change mitigation and is Vice-Chairman of the SUN group. Pratap Raju is the founder of the Climate Collective Foundation and India country head for New Energy Nexus. Shilpa Patel is Director of Mission Investing at ClimateWorks Foundation. Here are some highlights.

India plays a critical role in the direction of our climate future. It is the third largest emitter in absolute terms, and although its emissions per capita are lower than the top two, it is the second most populous country in the world and poised to become the largest. It is also striving to lift its population into greater prosperity – so we can expect its energy use and therefore emissions to grow. The development path it follows will have a significant impact on climate. There is need for action across multiple fronts: policy, regulation, ecosystem development, investment – and across multiple sectors: energy, transport, agriculture, infrastructure. Our discussion focused on clean energy and the role for philanthropy and investment.

The panelists put forth different approaches to promoting and supporting clean energy. The MacArthur Foundation has pursued an ecosystem-based approach to support climate action, advance climate-friendly policies and regulation, and build capacity. In impact investment, they provide a continuum of support, from pipeline development to direct investment to broader market development. Uday wears two hats: the first as a philanthropist who has worked on climate change mitigation since COP1 in Rio in 1992, accelerating his activities to look at Indian policymaking, climate finance, and climate philanthropy, and the second as a businessman who has established electric mobility and renewable energy businesses over the last decade in India and elsewhere. His focus is on scale and additionality. Pratap stressed the need for innovation: 30 to 40% of the technologies that we will need to steer us towards a net-zero world either do not yet exist or are not deployed on the ground. He sees a big role for startups and innovation, which his work supports in India. All agreed that these approaches are complementary and that there are many paths to progress.

Uday sees philanthropy playing a critical role in creating the bridge between government policy, the private sector, and civil society to create the policy environment within which new policies are formulated that attract capital and align markets. He mentioned the Clean Energy Finance Forum and the Rooftop Solar Policy Coalition as examples of such an approach. Philanthropic capital is the rarest form of capital, said Moutushi, and so we have to very carefully deploy it to the most catalytic uses, creating the conditions to mobilize large flows of capital, among others. Pratap focused on the startup ecosystem, which has grown by leaps and bounds in the last 15 years in India, and is today a vibrant marketplace with over 1200 startups in the cleantech space alone. But, there remains a significant gap between family or local support and private investors – and this is where philanthropic capital can build the platforms to connect startups to stakeholders.

All three panelists saw significant investment opportunities in India. In the startup space, there is need for more impact capital over the next 5-8 years for early stage funding in pre-Series A and pre-seed rounds, until the ecosystem matures and stands on its own feet. In fact, Climate Collective Foundation is creating a “seed accelerator fund” to support the most promising startups that come through their accelerator each year. The Australian government is supporting the Climate Angels Network to crowd in more investors, both local and cross-border. Moutushi talked about the investment gaps that they identified in the rooftop solar space, and the resulting suite of interventions via the India Clean Energy Facility and the India Catalytic Solar Finance Program, financed by a consortium of foundations including MacArthur and ClimateWorks. These investments work through the Indian financial system and provide tangible evidence of results on the ground. Uday sees tremendous opportunity in India in clean energy and transportation and room for capital at all stages of enterprise development. His approach is entrepreneurial: creating network economics and network ecosystems that would be difficult to replicate and provide a competitive edge – as in the initiative that separates the battery from the vehicle and provides it on a pay-as-you-go model that makes EVs cost-competitive. He pointed out that technologies developed in emerging countries are sometimes better adapted to the developing world and have the potential to disrupt more developed markets.

A common thread that emerged is that these philanthropic approaches and investment strategies may have climate change mitigation and clean energy as their focus, but they generate ripple effects that deliver a lot more. Moutushi acknowledges that the journey towards clean energy may have disproportionate impacts on some groups, and it is important to MacArthur that these groups be supported in ways that allow them to participate in prosperity and the country’s new future. For Pratap, this means the inclusion of local entrepreneurs – including more women entrepreneurs – in the solution or deployment to increase the likelihood of success, and of using a “gender+climate” lens in startup business models and pitches to reflect the disproportionate impact of climate change on women. Uday says that we need to look at these issues holistically and stressed the co-benefits that clean energy can bring: the huge benefits to air quality in polluted cities and the economic empowerment that his battery-swapping initiative provides to low-income rickshaw drivers, for example.

The discussion was rich, in-depth, and nuanced. What is clear is that all the panelists are doing really interesting work and are very bullish on India. I am sure we will hear a lot more about them and their work as India implements its climate commitments.

Shilpa Patel is the director of mission investing at ClimateWorks Foundation. ClimateWorks is a global organization consisting of experts in climate science, public policy, economic and social analysis, and strategic philanthropy, and is committed to ending the climate crisis by amplifying the power of philanthropy. Shilpa works with partner foundations on the design and implementation of mission investing strategies and programs focused on climate change mitigation. Shilpa has been heavily involved in the India Catalytic Solar Finance Program, which is a multi-foundation effort aimed at developing the Indian rooftop solar market.

Listen to the recording here.

This post was originally published on Confluence Philanthropy’s blog here. 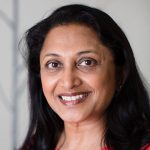