A Vision for a Robust Global Stocktake

A Vision for a Robust Global Stocktake 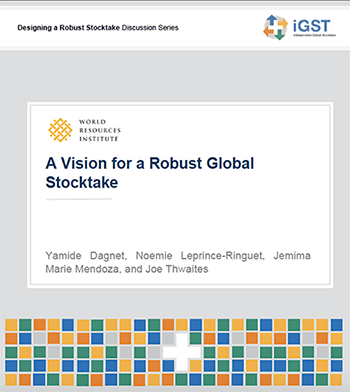 The Global Stocktake (GST) is a process established under the Paris Agreement (PA) to periodically take stock of collective progress toward achieving the purpose and long-term goals of the PA. In 2018, the Parties negotiated the core structure of the GST at the 24th Conference of the Parties to the United Nations Framework Convention on Climate Change (COP24) in Katowice, Poland. The elements of the GST process and details of the substantive information to be considered still need to be fleshed out.

This issue brief reviews ways to make the GST most effective within the confines of the structure already negotiated. It builds on a series of publications under the Independent Global Stocktake (iGST)—a collaborative effort by climate modelers, analysts, campaigners, and advocates that aims to support the GST process. It was prepared on the basis of a multiyear research effort by multiple organizations under the iGST’s “Designing a Robust Stocktake” discussion series, which analyzes the GST from a variety of angles, such as mitigation, adaptation, finance, and equity. The publications in this series were produced through targeted interviews, webinars, written feedback, and direct inputs

To release this paper, the World Resources Institute (WRI) and ClimateWorks Foundation hosted the event ‘Making the Paris Agreement Work: A Vision for a Robust Global Stocktake’ that took place on Tuesday, September 29th, 2020. Panelists included:

Download Paper: A Vision for a Robust Global Stocktake