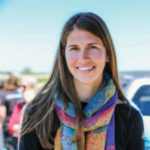 Lindsey most recently served as Chief Program Officer at Greenpeace USA where she oversaw strategy and climate, forests, oceans, and democracy campaigns. Lindsey previously spent almost a decade with Rainforest Action Network, serving as the Executive Director during a time of significant growth and increased focus on diversity and justice reform. Lindsey began her career as a forest campaigner, working to end destruction of the Amazon rainforest and North American Boreal forest. Motivated by the urgency to accelerate justice and climate action,

Lindsey is deeply committed to protecting forests, lands, and the rights of Indigenous and frontline communities to create a just and liveable future. Lindsey graduated from Humboldt State University with a BA in Anthropology.

Blogs and reports by Lindsey Allen

We will avoid the worst impacts of a warming world... Read More