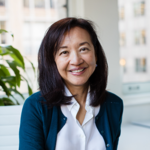 Irene leads development and donor relations, working with generous philanthropists to ensure that ClimateWorks’ programs and services have the resources to address the climate crisis. She has decades of experience working with major philanthropists to realize visionary goals and solve complex problems, collaborating with diverse colleagues, and managing large organizations. Irene came to ClimateWorks after a long career in development at UC Berkeley, where she played a number of leadership roles, and was part of three university campaigns. Irene played a pivotal role in the $120 million Hewlett Challenge committed during Berkeley’s last campaign and the creation of the Berkeley Endowment Management Company. As Associate Vice Chancellor – Advancement and Executive Vice President of the UC Berkeley Foundation, Irene led a team of 100 staff, and was part of the leadership team that doubled annual fundraising totals over four years. Irene served as the campaign director for the quiet phase of Berkeley’s current $6 billion Light the Way Campaign, working with academic and programmatic units, development and campus leaders, faculty, Trustees, and donors to develop campaign infrastructure, set priorities, and raise the nucleus fund of the campaign. Prior to UC Berkeley, Irene worked at Project Athena at MIT. She holds a B.A. from Wellesley College.