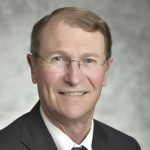 Franklin M. (“Lynn”) Orr, Jr. served as Under Secretary for Science and Energy at the US Department of Energy from December 2014 to January 2017. Orr has been a member of the Stanford faculty since 1985, and is an emeritus faculty member in the Energy Science and Engineering Department at the Doerr School of Sustainability. He has been deeply involved in interdisciplinary research to reduce greenhouse gas emissions through Stanford’s Precourt Institute for Energy and Woods Institute for the Environment.

Orr is a member of the National Academy of Engineering. He served as vice chair of the board of directors of the Monterey Bay Aquarium Research Institute and chaired the Advisory Panel of the Packard Fellowships for Science and Engineering for the David and Lucile Packard Foundation until 2014, rejoining that panel in 2017, and was a foundation board member from 1999-2008.