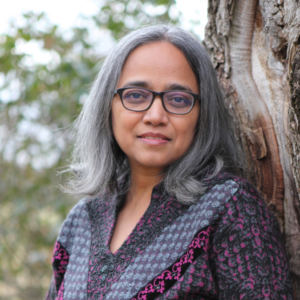 The Climate Imagination Fellowship is a project bringing together authors of speculative fiction to use the power of imagination to envision a positive climate future. Jason Anderson, program director at ClimateWorks, sat down with Vandana Singh, a Climate Imagination fellow, author, and professor of physics, to discuss how she integrates her interests in science and storytelling in conceptualizing the climate crisis. This interview has been edited for length.

Jason: How did you first get interested in science and fiction?

Vandana: I was very lucky to grow up in India before there was a lot of globalization and technological distraction. Our playground was, in one sense, the cosmos. My brother and I would sleep under the stars and look up at the sky and wonder if aliens were looking back at us. I also read a lot, science fiction in particular. This led me to get really interested in science and it seemed almost inevitable that I would follow the path of science. One of the common aspects of science and science fiction is they both can evoke a sense of wonder.

Jason: Something that comes through in your writing is a real appreciation for the deep richness of storytelling. Is that something you grew up with too?

Vandana: One of the magical things about growing up in India is that you can almost pluck stories from the air. I was attuned to the notion of story from a very early age because we lived a very relational lifestyle. People were always in each other’s business, interacting in neighborhoods with deep relationships that extended beyond the family and so on, including non-humans. Even doing the simplest things, like going with my mother to the vegetable market in the evenings, people would exchange stories while buying produce.

Jason: Is your process of imagination different when you are conducting scientific work, and when you’re writing fiction?

Vandana: As a scientist, I have great respect for science as a rigorous process and the need to be very conscious of what influences, bias or preconceived notions you may bring to what you study. But in a sense, when we, as scientists, try to eavesdrop on what nature is telling us in these very different ways, one thing we may forget is that we are also a part of nature. Modern science requires this separation of the self from what you are studying. Science fiction allows me to get away from the subject-object separation that is the norm in science to be a participant observer in the universe.

Jason: Do you ever find yourself trying to predict things that might happen in the future?

Vandana: The question of predictability is interesting because the Newtonian, or mechanistic view, of the universe is what drives and animates most of modern science. This is where we think of the universe as a huge clockwork machine, even though relativity, quantum physics, and complex systems science tells us the universe is not Newtonian. The loss of Newtonian predictability doesn’t mean we don’t have any access to information about the future. But it demands different questions of us and gives rise to a more probabilistic sense of possible futures. The lack of certainty is exciting because there are so many “what if” stories you can write about possible futures.

We need to approach the climate crisis in an integrative way: carbon emissions and biodiversity loss, land system, other social, economic, and environmental problems.

Jason: We’ve been talking about physics but climate change is also very complicated. What is your opinion about how it is being approached?

Vandana: In my academic work, I try to re-conceptualize the climate problem through a trans-disciplinary, justice-centered perspective. It is science-based, but goes beyond the science to also consider the paradigms and perspectives we carry around with us, which are a consequence of our social, cultural histories, along with other influences. Most of the time we are not aware of our paradigms, a problem I call paradigm blindness. Once you are aware that your view of the world is just one conceptual construct, you can then say, “What are other ways to consider this issue?”

When I consider a problem like climate change that defies our current frameworks, I ask the problem itself to become the teacher. I must then develop a framework that is in response to the key characteristics of the problem, whatever they might be. And, I have listened to the stories of people on the margins, on the frontlines of climate change, to get out of my preconceived paradigms, to see it differently.

Unfortunately my sense of the mainstream climate discourse is that concepts and purported solutions continue to be grounded in the same paradigm that caused the problem in the first place.

Jason: When you’re contending with important current events like climate change, how do you balance the inclination to be didactic or campaigning with the need to write a compelling and creative story?

Vandana: It can be a hard balancing act sometimes, especially when it’s a problem you feel strongly about, as I do about climate change and I have a deep academic interest in it as well. I find that letting myself fall into the vortex of the story and letting it sweep me along allows the things that are important to me to surface in some form or the other without destroying the story.

Jason: In the short story “Indra’s Web,” in your book Ambiguity Machines and Other Stories, were you tackling the response to climate change more head on?

Vandana: Yes, I was. But while I did a lot of research on energy networks, and mycorrhizal networks, and thought about what a possible future city might look like – not a ‘smart city’ but a ‘wise city’ – it’s also a human story. I enjoyed writing it quite a bit!

Jason: Do you think about the kinds of technological transformations that are underpinning any discussion of positive climate futures? Do you think we need to drive the same kind of transition in the accompanying social order, and is that even possible?

Vandana: Both need to happen together. We are used to looking at technology as though it existed independent of the social, ecological, and economic context. If we are simply thinking of substituting fossil fuel technologies with renewables, then we are making a major mistake. The climate problem is not solely a scientific-technological one; it is also about our socio-economic system and our paradigms. We need to approach the climate crisis in an integrative way: carbon emissions and biodiversity loss, land system, other social, economic, and environmental problems.

Vandana: It’s not a question of solving one problem and then solving the other. The socio-economic-cultural paradigm of modernity tends to encourage sequential, compartmentalized thinking. The fact is, the climate problem is related to all these other major social-environmental problems, and therefore the solutions need to emerge from a paradigm that recognizes their inter-relatedness. Such solutions would tackle our entangled problems together, in an integrated way.

We live in a complex world and we have interacting complex systems. The future isn’t totally determined. Is it possible to find some kind of response that can marry a few rivulets together so you have a stream that can turn the river away from the edge of the cliff?

Jason: You often bridge past and future within the same story and refer to time as a river delta with rivulets that split off and recombine. Is there relevance to climate change in this perception of time?

Vandana: Time has always been a fascination for me. I think the way time can be like a river delta instead of simply an infinitesimally thin axis going off into the future is precisely because of the fact that we live in a complex world and we have interacting complex systems. The future isn’t totally determined. Is it possible to find some kind of response that can marry a few rivulets together so you have a stream that can turn the river away from the edge of the cliff? Story allows you to experiment with all those possibilities.

Jason: What are your thoughts on optimism and what form that can take in a world where you have deep inequality, a history of colonialism, and a pretty bad track record of actually dealing with climate change?

Vandana: There are people who are optimistic because they have privilege. But we know that the world is full of suffering. It is very important to acknowledge the power structures that cause this, and that power itself is part of the problem because it stands in the way of needed change. The kind of optimism that appeals to me is not the empty or delusional optimism of the privileged, but the defiant, creative persistence of the marginalized, despite great odds.
And it’s not just human suffering, but multi-species suffering.

I also feel that hope and despair are both traps. Maybe what we need to do is focus more on meaning. When people work together, we can grieve together, we can weep together and celebrate together. It’s not only about doom and gloom.

Jason: What have you picked up from mentors in your own path that you’d like to pass on to younger people?

Vandana: That there is beauty and creativity and intelligence in the right kind of togetherness. That we need not be alone. That the world is not a machine. That we are a part of something incredible – the web of life on our planet. That it’s all right to howl at the moon when the moment takes you. That change happens sometimes when we least expect it.