COP26: Successes, shortcomings, and opportunities ahead

COP26: Successes, shortcomings, and opportunities ahead

Increased engagement around the annual climate conference has created new opportunities and imperatives for philanthropy to be a delivery mechanism for commitments set forth there.

It has been several weeks since the conclusion of COP26 in Glasgow, and there are now many published analyses that evaluate the outcomes of the latest global climate summit. Some have been quick to declare failure, and while no one has declared a full success, many see real progress.

Objectively, the COP alone hasn’t put us on a pathway to 1.5° C of warming or provided the financial support needed to aid less developed and vulnerable countries in responding to the climate crisis. In the absence of groundbreaking new commitments among countries, some critics also argue that this was the 26th failed attempt at achieving a global agreement that gets the world on the path to a climate-safe future. However, these critiques are unfairly dismissive of the role of diplomacy in finding consensus among nearly 200 disparate parties on complex issues. While it highlights the immense work that is needed to get unambitious actors to join the cause, it doesn’t indict the entire COP process either.

All told, it’s hard to give a black-or-white assessment of whether this COP was a success or failure, but there were some developments at the most recent meetings that have important implications for climate funders.

The evolution of the COP process

Over the years, COP has begun to involve a gradually widening cast of characters. Since the Paris Agreement was signed at COP21 in 2015, the official negotiations among the 197 UNFCCC Parties have occupied a smaller space at the center of concentric circles of activities. Surrounding it are the non-state actors that are making an increasing number of commitments to reduce their climate impacts, and around them is the broader climate expert community, including organizations like ClimateWorks.

The reduced focus on official negotiations was on display in Glasgow, as the first week of meetings was dominated by thematic announcements, such as the Global Methane Pledge, among many others. This overall shift reflects a growing understanding that official negotiations can only take us so far in the limited time we have to achieve the goals of the Paris Agreement, and that addressing the climate issue in smaller, more manageable chunks can help to drive faster progress.

This development of parallel activities is noteworthy for climate philanthropy. In the past, COP had been a focal point for the small segment of funders focused on the official U.N. negotiation process, but the growing number of commitments being made by sector-based groups and other coalitions of countries means that the broader COP process is more relevant than ever for a wider segment of the climate philanthropy ecosystem. 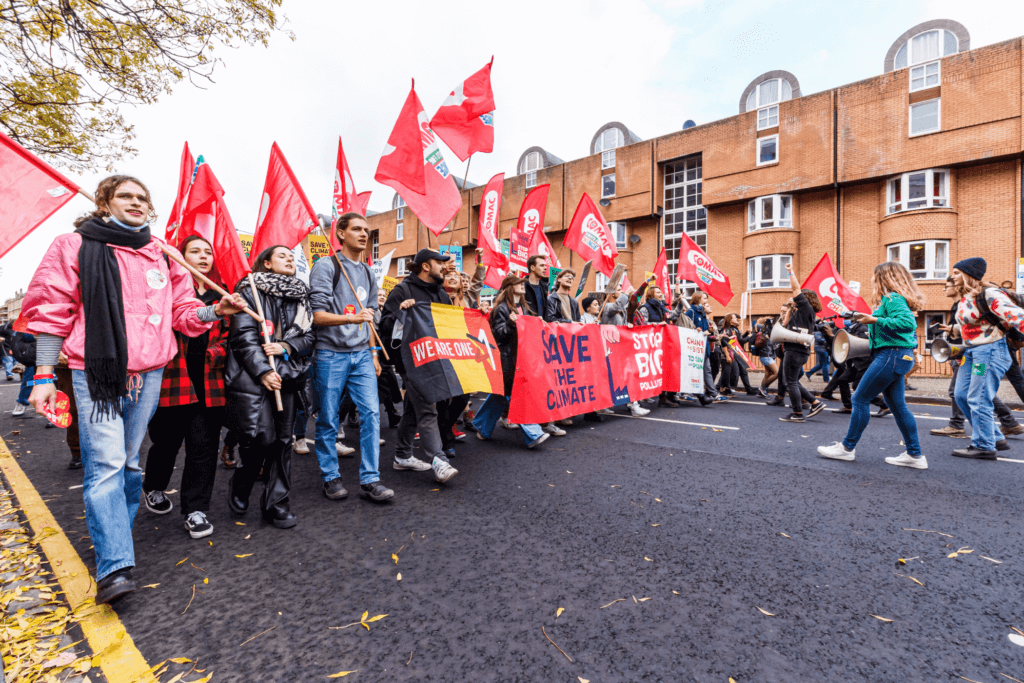 Around 100,000 people took to the streets of Glasgow on November 5 and 6 to demand more climate action. Protesters in over 100 other countries joined the “Global Day of Action for Climate Justice,” including Kenya, Turkey, France, Brazil, Australia and Canada. PMGphotog/Shutterstock

If the official U.N. negotiating process is at the center of COP’s concentric circles, the outermost ring comprises the general public, including marches and protests as well as other activities that are open to a general audience.

Paradoxically, even as the broader COP process is becoming more relevant to a wider range of actors because of the need to make progress outside of official negotiations, the official negotiating process itself is becoming more restrictive and exclusionary. For example, Climate Action Network, a ClimateWorks grantee representing 1,500 civil society organizations in 130 countries, had only two passes to enter negotiating rooms. This is significantly different from more expansive access NGOs have had in the past. Indigenous people, youth groups, and the disabled, among others, all complained of a lack of inclusion. Add to that the growing frustration that governments aren’t moving faster to achieve the goals of the Paris Agreement, and it’s no wonder that as 100,000 motivated people marched on the streets of Glasgow; they didn’t view the people in the conference center as allies.

This stark mismatch between public expectations for more high-level progress, the stodgy pace of the official negotiating process, and the complex patchwork of real-world advances in climate action, is problematic. Efforts like those of the two official COP Climate Champions have begun to address this imbalance, but climate funders have an opportunity and responsibility to use our relationships with a wide range of actors to explore whether these gaps reflect an inevitable difference in worldviews, a strategic balance of actors, or a need to refine structures and processes.

As we’ve written before at ClimateWorks, the immense global challenge moving forward is the need to translate commitments made at COP into real-world actions and emissions reductions, and philanthropy has a clear role to play in catalyzing progress. We can ill afford to have the most motivated segments of the population view climate diplomacy as futile; their energy should remain an inspiration, not a force to be sidestepped. At the same time, much work needs to be done to better communicate to the public that encouraging progress is being made through other channels as well. Nevertheless, these many commitments will only be credible if they are implemented, monitored, and enforced.

There’s no shortage of opportunities emerging from COP. Several of our programs and initiatives — including Cooling, Finance, Forests & Land Use, and Road Transportation — have outlined some ways the field is poised for increased investment and accelerated impact. We will continue to share emergent opportunities ahead of COP27 in Egypt and as we enter the third year of this decisive decade to solve the climate crisis.