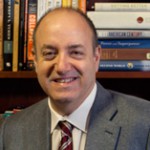 The William and Flora Hewlett Foundation

Larry Kramer is president of The William and Flora Hewlett Foundation in Menlo Park, California.

Before joining the Foundation, Mr. Kramer served from 2004 to 2012 as Richard E. Lang Professor of Law and Dean of Stanford Law School. During his tenure, he spearheaded significant educational reforms, pioneering a new model of multidisciplinary legal studies. His teaching and scholarly interests include American legal history, constitutional law, federalism, separation of powers, the federal courts, conflict of laws, and civil procedure.

Prior to his time at Stanford, Mr. Kramer served as professor of law at the University of Chicago and University of Michigan law schools and as Associate Dean for Research and Academics and Russell D. Niles Professor of Law at New York University School of Law.

Mr. Kramer is a fellow of the American Academy of Arts and Sciences and a member of the American Philosophical Society and the American Law Institute. He serves on the board of directors of Equal Justice Works, a nonprofit organization that helps advance public interest law.

Mr. Kramer received an A.B. in Psychology and Religious Studies from Brown University, and a J.D. from the University of Chicago Law School. He is the author of numerous articles and books, including The People Themselves: Popular Constitutionalism and Judicial Review.