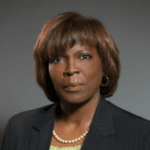 Ertharin Cousin serves as a Robert von Weisacker Fellow of the Bosch Academy, a Stanford University Visiting Scholar at the Center on Food Security and the Environment and a distinguished fellow of global agriculture at the Chicago Council on Global Affairs.  Cousin recently launched Food Systems for the Future, an innovative nutrition impact investment fund.

She previously served as executive director of the World Food Programme from 2012 until 2017. In this role, Cousin led the world’s largest humanitarian organization with 14,000 staff serving 80 million vulnerable people across 75 countries. Cousin possesses more than 30 years of national and international nonprofit, government, and corporate leadership experience.  She maintains relationships with global government, business, and community leaders. She has published numerous articles regarding agriculture, food security, and nutrition.

In 2009, Cousin was nominated by the president and confirmed by the Senate as the US ambassador to the UN Agencies for Food and Agriculture in Rome. In this role Cousin served as the US representative for all food, agriculture, and nutrition-related issues. Cousin regularly represented US interest in global leader discussions, including prime ministers, foreign and agriculture ministers, academics and business executives, regarding humanitarian and development activities.  Cousin helped identify and catalyze US government investment in food security and nutrition activities supported by the USAID Feed the Future program.  Cousin convened foreign media tours resulting in millions of conventional as well social media impressions.

Prior to her global hunger work, Cousin helped lead the US domestic fight to end hunger while serving as executive vice president and chief operating officer of America’s Second Harvest (now Feeding America). In this role Cousin led the operations, budgeting, and expenditures as well as the human resources, IT, and training activities of this national confederation of 200 foodbanks across America serving over 50,000,000 meals per year. Previously, Cousin served as senior vice president for Albertson’s Foods. As a corporate reporting officer, Cousin served as the Albertson lead for community relations, customer relations, legislative and regulatory affairs, industry and external relations, including communications serving as the company’s chief spokesperson. While serving at Albertson she was appointed by the US president to the Board for International Food and Agricultural Development where she helped oversee US government agriculture research investments worldwide.  Before Albertsons, Cousin also served in government as the White House Liaison to the State Department. She received the department’s Meritorious Service award for her work expeditiously and successfully addressing foreign policy issues which arose when the US hosted the Atlanta Olympics.